I lift in the morning, game in the evening, and code in the afternoon.
I'm a programmer by trade and I have a love for Web Development, especially when it comes to Javascript.
I enjoy cooking, powerlifting, and both digital and tabletop gaming in my freetime.
Feel free to reach out to me via Twitter, LinkedIn, or Email.

My first stab at prototyping a game idea out in Javascript and in general, since I was in school. A resource management style of game seemed like a good place to start learning as it boils down to "Numbers in Action". The long term intent was to add random events to shake up resource storage and generation and have the player cope with those challenges.
This project was written using Javascript.

An abandoned entry to the 2015 js13k game jam.
The goals of the game jam each year are: I got off to a good start with this, but had to give up on it due to time contraints.
I used a gulp workflow to auto the minification and zipping of the files as I worked.
This project was written using Typescript.

This project represents a major collection of learning experiences for me. To date I have implemented a number of concepts and features such as: I hope to return to this project, or recreate it with lessons learned, when creativity strikes me again.
This project was written using Typescript. 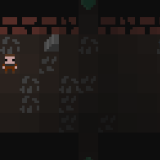 My entry to js13k in 2017. This was the first game I ever reached a complete state with.
Super bare bones maze exploration gameplay with a few features to assist the player in reaching the exit with all of their explorers.
My biggest short comings in this game were a lack of a definitive lose condition, and direct threats or pressure on the player.
The theme for this year was "Lost", so my first thoughts were to make the maze itself, and not solving it the threat; however I did not convey this well to the player, so it fell short during judging.

This project was written using Typescript.

A WIP WebGL engine, that is based heavily on the code from my js13k 2017 entry, and some other experiments not present on this page.
I built this with the hopes of giving me some engine style code to use during js13k 2018; however I was unable to participate that year.
This project was written using Typescript.

A WIP tower defense game, utilizing the code created in my Typescript WebGL engine.
There is not gameplay yet, this is actively being worked on.
This project was written using Typescript.